“Vladivostok-2000”. Now this is not only a line from the refrain of Ilya Lagutenko, but also a bill known throughout the country. By the way, the bridge depicted on the banknote became the city’s business card almost as soon as it was built. After that, several more large objects were included in the list of Vladivostok’s top places – the campus of the Far Eastern Federal University (FEFU) and the Primorsky Aquarium.

It will be interesting to spend a weekend in Vladivostok for residents of Khabarovsk, Ussuriisk, Nakhodka of other nearby cities, the road from which will not take long.

The approximate travel budget for one person is from 4,050 rubles *.

The entrance to the campus for all citizens was opened in the summer of 2014. Since then, at any time of the year, every weekend the FEFU embankment resembles the Nevsky Prospect of St. Petersburg: there is beauty all around and a lot of tourists. And from July to September, when the water temperature in the Ajax Bay rises to 20-25 degrees, local residents fill the entire beach area, a little more than one kilometer long.

The entire campus area is 800,000 square meters. These are educational buildings, exhibition complexes, and a walking area, which will be the most interesting for tourists. Since there are no longer well-groomed massive parks with trees, ponds and a waterfall in Vladivostok, it is worth going for a walk to Russky Island.

You can get here only by a modern cable-stayed bridge – the second highest in the world (324 meters).

Where is: Russky Island, Ajax stop
Entrance to the territory: free 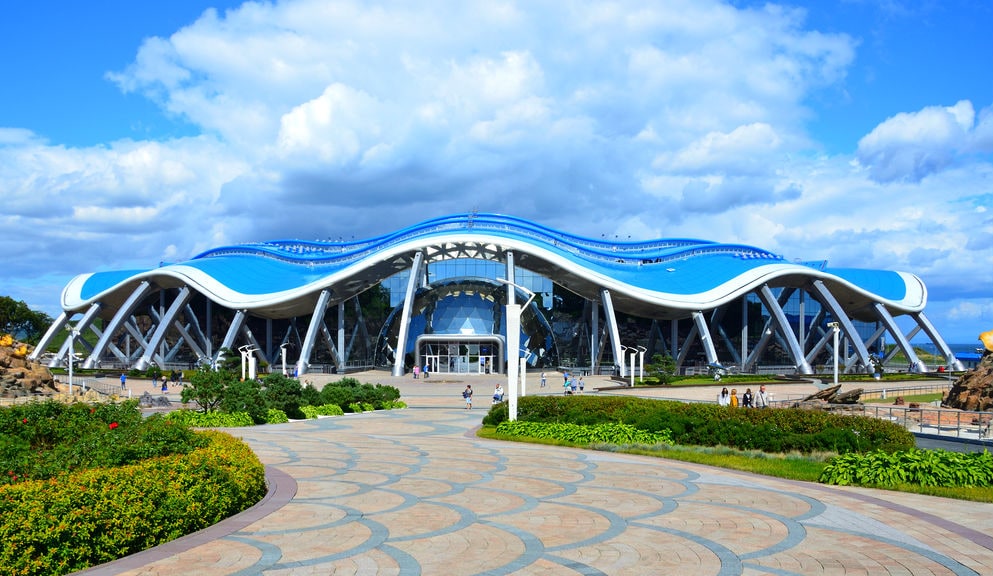 Russian Island is an integral part of Vladivostok, here, around every turn, and its own sights. For example, the Primorsky Oceanarium for 500 species of marine individuals and river inhabitants. And also – a show with Misha the walrus, dolphins, sea lions, seals and white whales.

The scientific and educational complex is divided into three expositions: the zone of the prehistoric period, the polar world and tropical forests. In addition to aquariums with fish, there are interactive platforms and touch screens with information about a particular species, habitat of the animal, etc. Guided tours are organized for all visitors. By the way, if the ticket price seems high, you can take a walk in the open area of ​​the aquarium for free. Free admission. 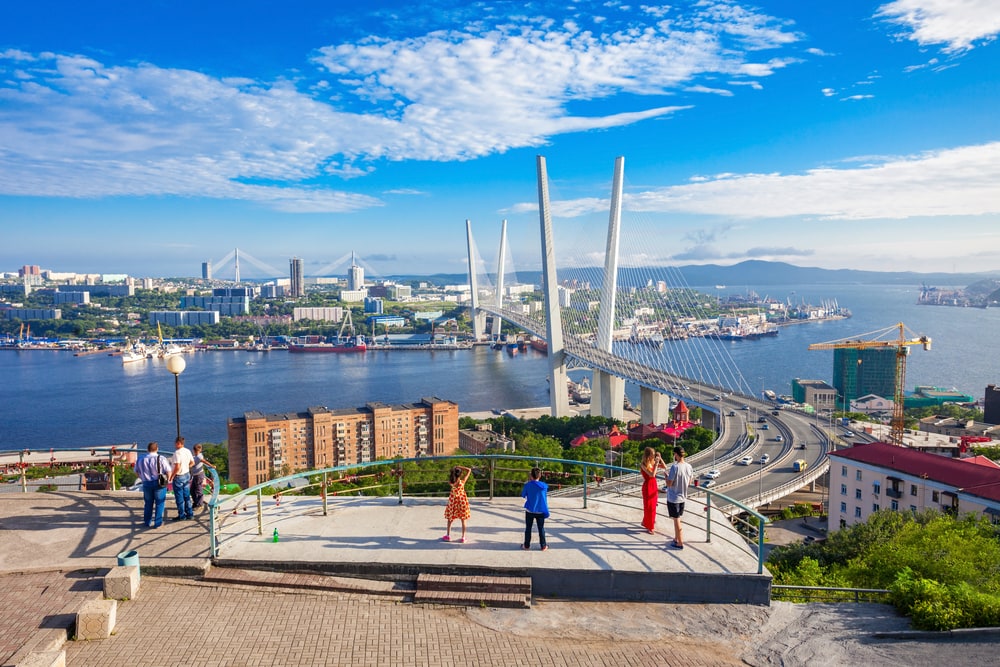 There is no need to talk about the bridge over the Golden Horn Bay for a long time: it is enough to see it once. The best view opens from a bird’s-eye view on the Eagle’s Nest viewing platform (the monument to Cyril and Methodius is also located there). The bridge is especially beautiful at night, thanks to the illumination and headlights of passing cars.

READ  Sea dolphinarium, cypress lake and the remains of the ancient city: what to see in Anapa in 2 days

Recently, the viewing platform has become famous for its graffiti: a giant Far Eastern leopard is painted on one of the walls of a nearby building – the symbol and pride of Primorsky Krai.
The image of the rarest large cat on the planet was created by the South African graffiti artist Sonny as part of a worldwide campaign to protect endangered animals. Vladivostok became the first city in Russia where such work appeared.

Location: above the viaduct from the upper station of the funicular or above the bus stop “Funicular” 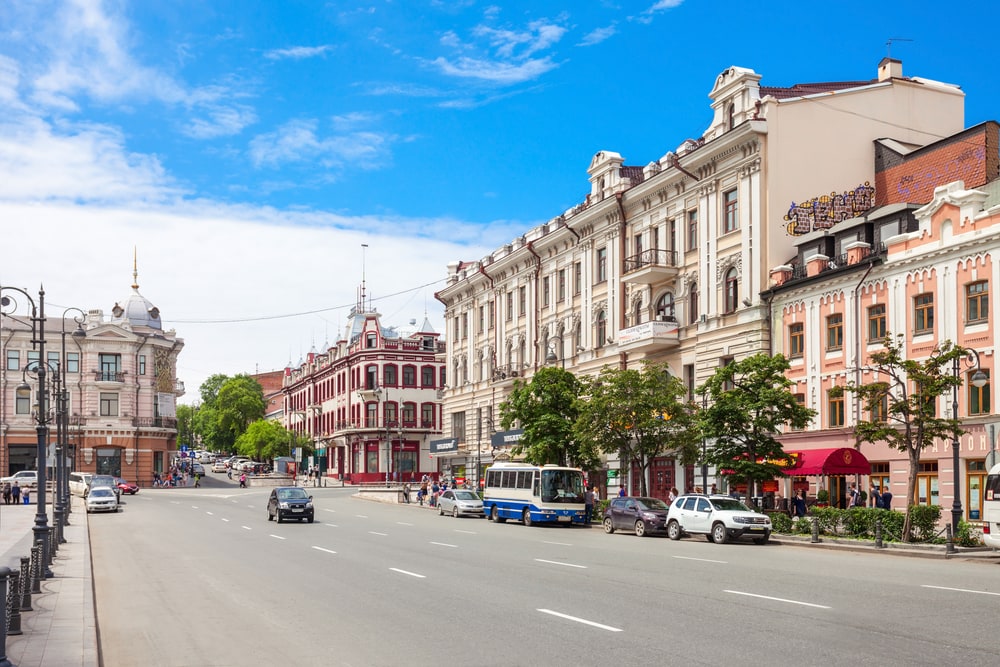 Moscow for tourists starts from Red Square, and Vladivostok – from Svetlanskaya, the first and main street of the city. Here: shopping centers, cafes, hostels, museums, cinemas, GUM and much more. It is on Svetlanskaya that many old houses of the late 19th – early 20th centuries are located.

Business and residential buildings of the past centuries can also be found on Pushkinskaya Street. Of particular interest are Gothic-style mansions, buildings resembling knightly castles, and facades with patterned metal grilles reminiscent of the era of “romantic modern”.

Where is: the starting point from Svetlanskaya to Pushkinskaya – the “Ocean” cinema or the “Ussuri” cinema 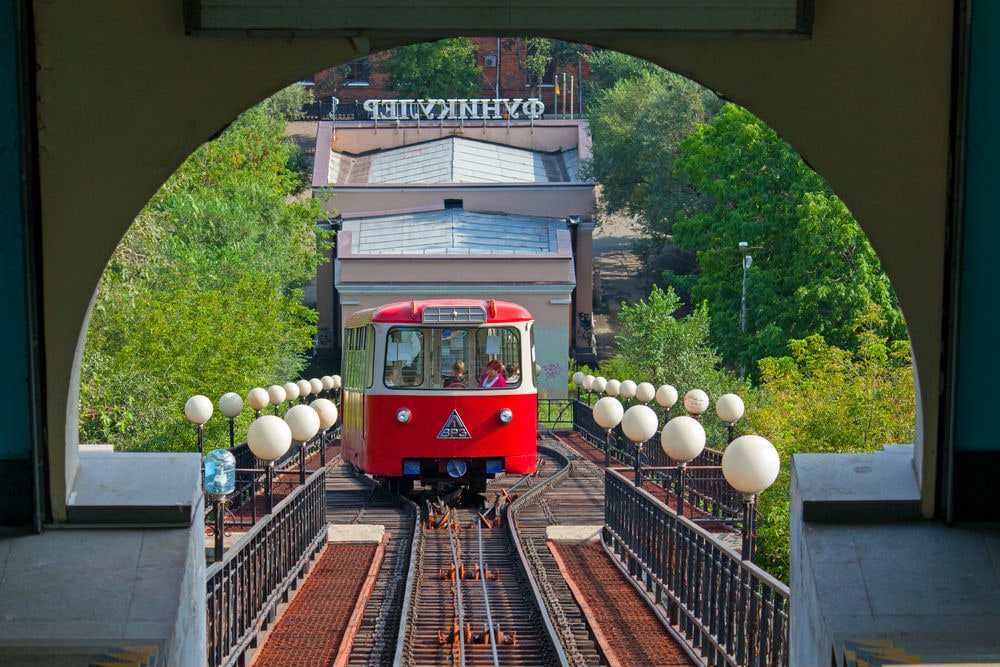 The funicular is a unique form of public transport. Such a rail tram works only in Sochi and Vladivostok (not to be confused with cable cars, which are sometimes also called funiculars).

The Primorsky funicular is only two cable cars with a cable drive, which go up and down the slope of the Orlina hill, linking Pushkinskaya and Sukhanova streets. The length of the route is 183 meters, which is 1.5 minutes on the way. Not long, cheap and effective.

The old courtyard of GUM 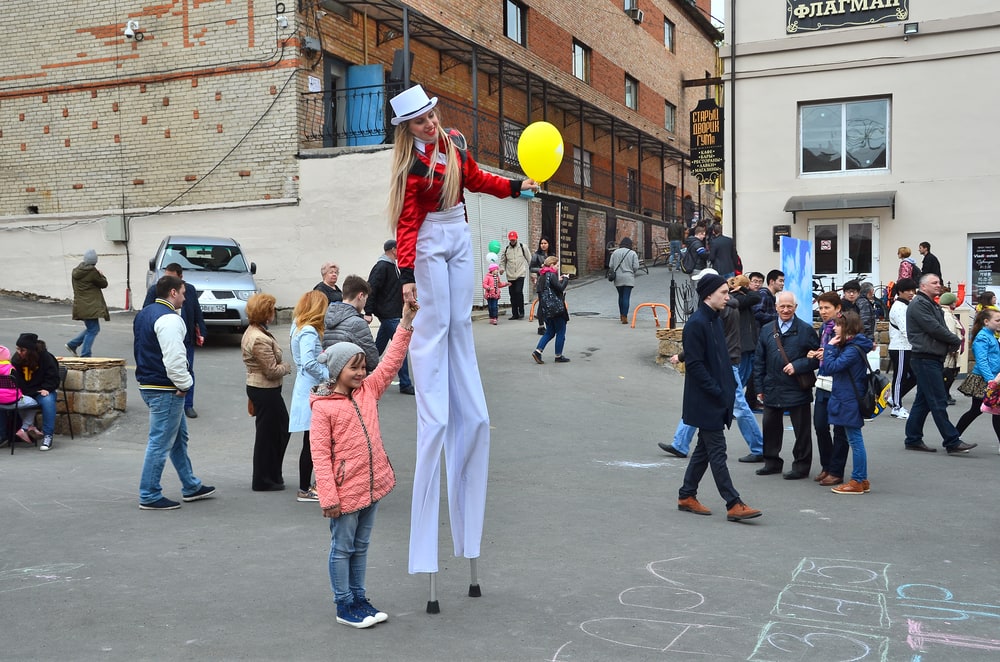 It is always crowded, noisy and cozy in a European way: music plays, there are many coffee shops, workshops, a hairdresser’s and there are several places with street art for selfies or full-fledged photo shoots.
The courtyard is located inside the old GUM building. The department store began its history back in 1884, when Vladivostok was only 24 years old. 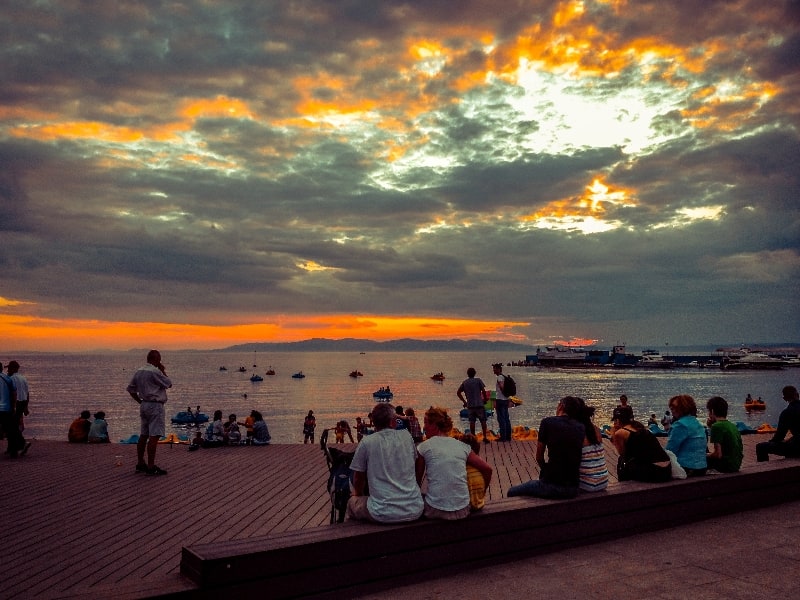 Another place where you can feel the spirit of the city and have a great time. This place got its name thanks to the Dynamo stadium, built here in the 50s of the last century.

READ  What to see in Yekaterinburg in two days: 14 most curious sights

There are many cafes along the embankment, there is a children’s park with attractions and a Ferris wheel. In warm weather, you can lie on the beach (swimming is prohibited), order your portrait from a street artist, ride a Ferris wheel, rent a bicycle or segway.

One of the attractions of the embankment is the Vladivostok Fortress Museum. The protective structure was built in the 19th century. Now, in addition to stone walls, there are many samples of weapons from different times. The territory of the museum offers an excellent view of the Sportivnaya embankment and the Amur Bay.

Location: near the central square of the city 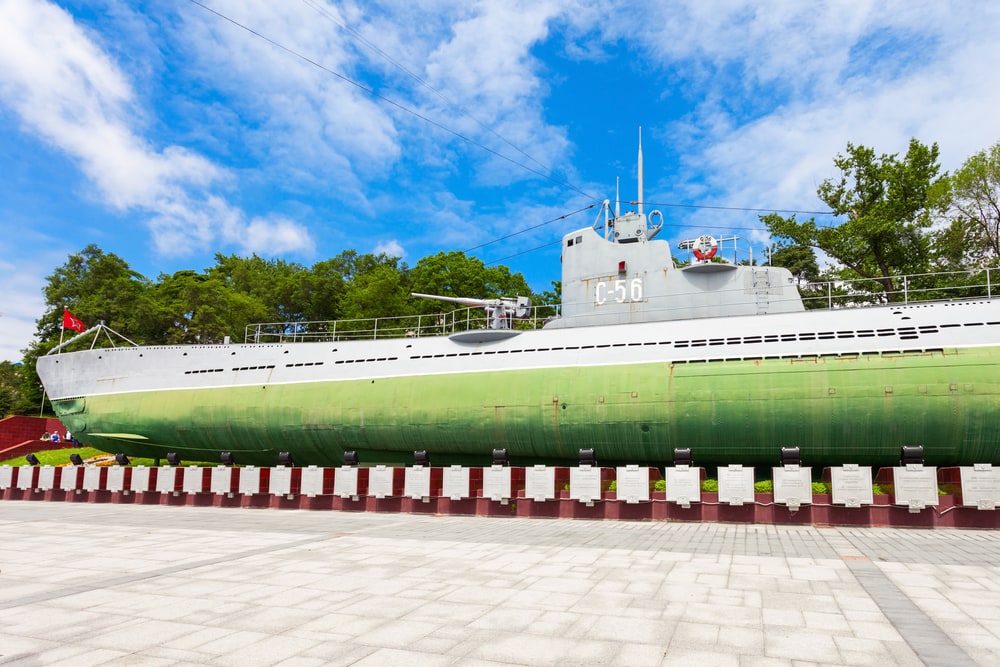 Korabelnaya Embankment is located in the very center of Vladivostok on the shores of the Golden Horn Bay.
Here sailors are seen off and met, and at noon the cannon rumbles. This is where the history of the city begins: it was on the northern shore of the bay, by order of Governor-General Nikolai Muravyov-Amursky, in the summer of 1860, the military post of Vladivostok was founded, which after 20 years received the status of a city.

There is a road from Korabelnaya embankment to the young Tsarevich embankment, laid not far from the pillars of the Golden Bridge in 2012. Parents with children, cyclists and roller skaters especially like to come here.

Where is: down 30 meters from the Arch of the Tsarevich or the Museum of the city to Peter the Great Street, 6

The main building of the Museum. V. K. Arsenyeva 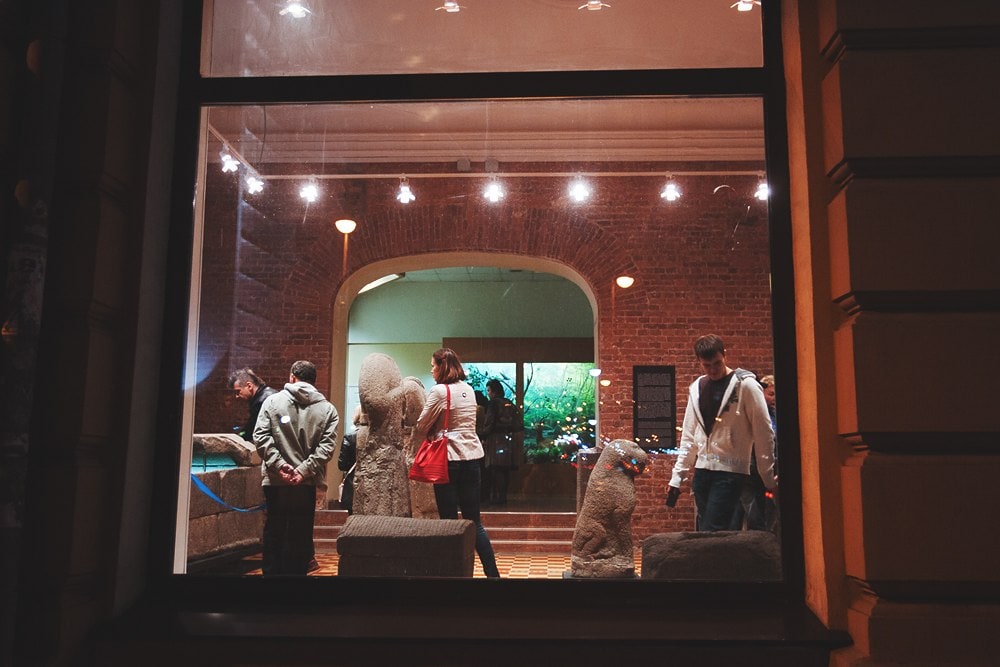 The Vladimir Klavdievich Arseniev Museum in Vladivostok operates under the motto: “Man. Space. Time”. This is the first local history museum in the Far East since 1884. The halls have been replenishing their collections for 130 years with the participation of researchers from the Far East, patrons and donors. To date, the complete collection is more than 400,000 originals. For example, the history of the city during the Civil War is kept here – in the form of photographs, notes and uniforms; artifacts of the Bohai era found on the territory of Primorye; letters of Mrs. Eleanor Prey from Vladivostok to America and much more.

The main building of the museum on Svetlanskaya Street is equipped for the blind and hard of hearing visitors, master classes and classes for schoolchildren are held here. There are permanent and temporary exhibitions on three floors.

Address: Svetlanskaya street, 20
Opening hours: daily 10: 00-19: 00 **
The cost of tickets must be checked with the administrator
Website: arseniev.org 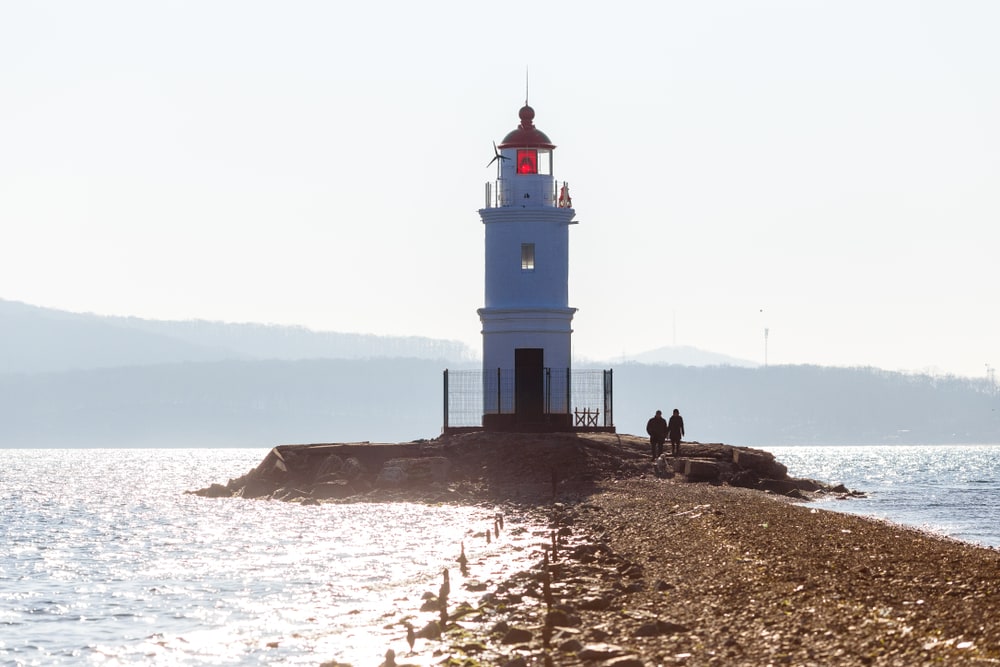 A port city is unthinkable without a lighthouse; it is located at Cape Egersheld. The Tokarevskaya kat lighthouse has been helping sea-going ships in the Peter the Great Gulf since 1910.
The tower stands at the tip of Tokarevsky’s cat. The cat is a narrow rocky spit about 750 meters long. Now it is artificially raised and looks like a dam. The depths in the immediate vicinity of the cat are shallow, and the tidal currents are fast, this greatly complicates the passage of ships between the cat and the Bezymyanny cape in the Eastern Bosphorus. The lighthouse shows where the cat ends. The range of the beacon’s fire is 12 miles.
By the way, next to the lighthouse, depending on the season, either townspeople or spotted seals swim in the sea. The water is clean enough here.

Where is: the final stop Mayak, further along the main road 1.5 kilometers towards the sea (on the map)

Tourists from all over the world come to the Seaside Safari Park. Including journalists of the National Geographic Channel for filming the next episodes of programs. There are practically no cages in the park, animals move freely around the territory. This is about 300 birds and animals on 9 hectares.

The safari park gained particular popularity and “likes” in social networks, when the history of friendship between the tiger Amur and the goat Timur thundered throughout the country. 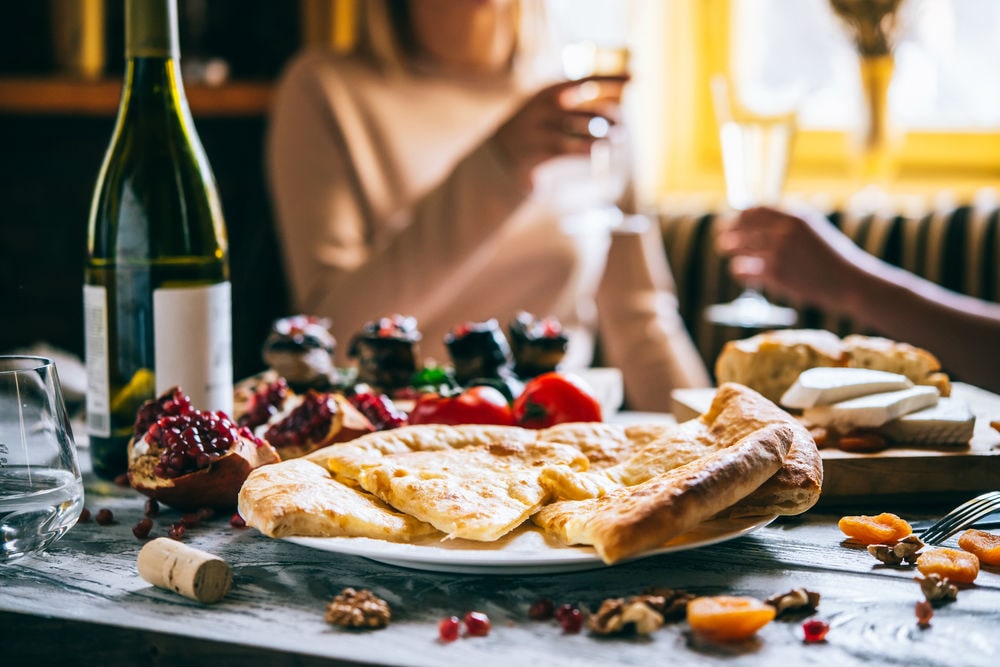 Supra is a restaurant of Georgian cuisine with very affordable prices, colorful atmosphere, rich and tasty assortment and a long queue. The disadvantage of the institution is that it does not provide for a “reservation”. It doesn’t matter if two guests want to dine or fifteen people came for dinner.

All you need to do is contact the administrator at the entrance and find out if there are free places. There is no table – take a ticket to the queue and wait. Waiting time: from 10 minutes to 1.5 hours, depending on the workload of the restaurant.

According to many visitors (even those who waited several hours on Friday or Saturday nights), the result is worth the wait. As a rule, people fall in love with Supra after the first khinkali and Adjarian khachapuri.