Arriving in any city for a day or two, you want to have time to see the maximum number of attractions and visit “cult” places. Yekaterinburg claims to be the most compact city with a population of over one million, therefore, the maximum number of objects can be crammed into the cultural program for the weekend.

Each of us has our own ideas about beauty, so our selection is likely to differ significantly from the generally accepted list. For example, we would not recommend visiting the zoo, despite the fact that it is located in the city center and contains hundreds of rare animals. There are zoos that are much more interesting – in the same Novosibirsk or Kaliningrad. This is clearly not a “visiting card” of the city.

It will be interesting to spend a weekend in Yekaterinburg for residents of Chelyabinsk, Tyumen, Ufa, Izhevsk, Perm and other nearby cities, the road from which will not take long.

Approximate travel budget for one person – from 3500 rubles. *

To get into the spirit of Yekaterinburg, it is worth, first of all, to walk along the Red Line (website).

The red line of Yekaterinburg is a walking tourist route through the historic center. The route is 6.5 kilometers long, it is marked with special markings on the asphalt and includes 35 main sights of the city – from monuments and estates to streets and squares. Here are some worth checking out:

The central square of the city

1905 Square is the central and oldest square in Yekaterinburg. Here is one of the most recognizable buildings – the city administration. This is an architectural monument in the neoclassical style (after reconstruction). Not taking a picture of the city administration building with its spire, clock and bas-reliefs is how not to visit Yekaterinburg. By the way, if you look closely at the entrance, then you will have a clear association with the TV series “Santa Barbara”. 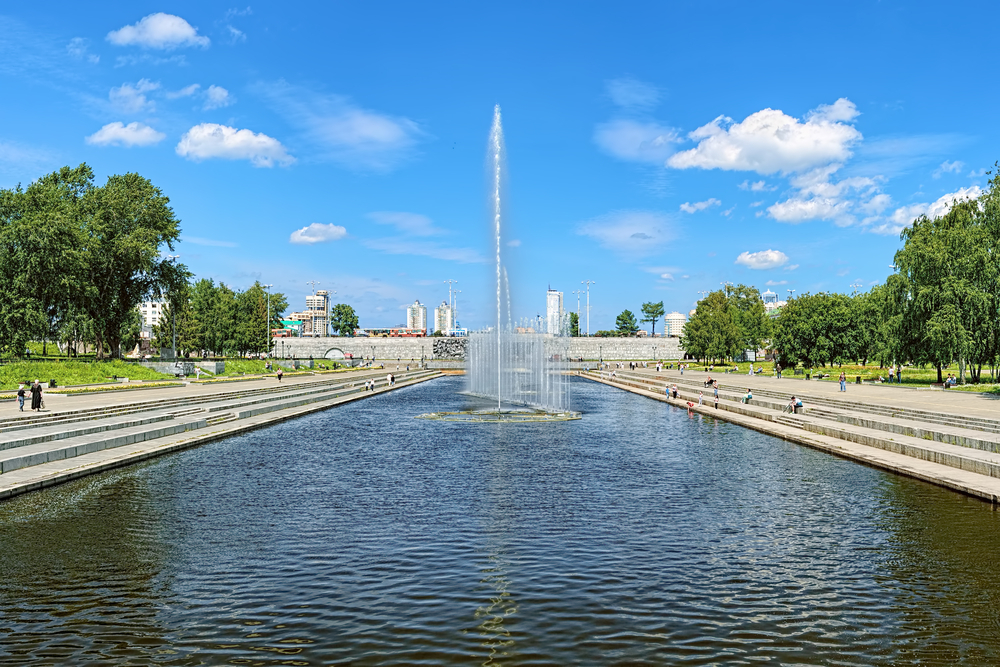 The dam is the main place for festivities in Yekaterinburg. The city pond was created in 1723 during the construction of the first Yekaterinburg plant. Then the embankment appeared. Here you can swim on a boat or listen to the songs of local musicians in the passage, admire the portraits of Viktor Tsoi, admire the fountains. In any case, you will not be able to pass and drive past the Plotinka, even if you try very hard. Reserve at least a couple of hours so you have time to evaluate everything. By the way, The Prodigy immortalized the Plotinka and the underpass this year in their video.

READ  Amur petroglyphs, Far Eastern cuisine and many fountains: what to see and taste in Khabarovsk in 2 days 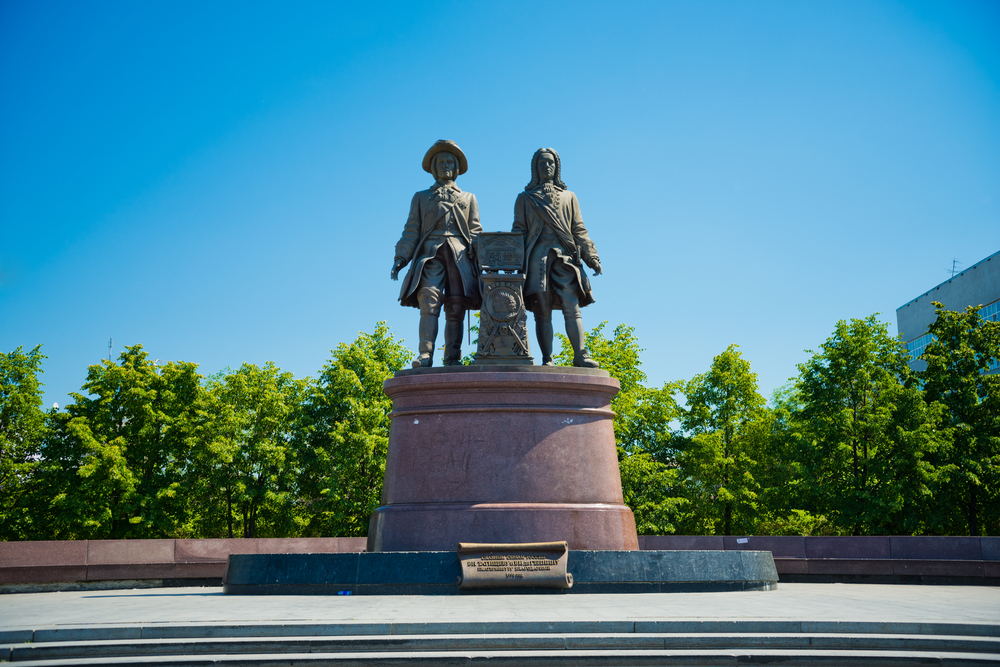 You don’t need to go far. Here, in the center, it makes sense to take a picture near the water tower in the Historical Square and near the monument to Tatishchev and De Gennin, the founders of Yekaterinburg. The monument appeared relatively recently, in 1998, in honor of the 275th anniversary of the city. Among the local residents, the unofficial name was fixed for the monument – the monument to Beavis and Butt-head.

One of the most recognizable objects in Yekaterinburg is the Sevastyanov House – a palace built in the first quarter of the 19th century on the banks of the City Pond, formed by a dam on the Iset River. In 2008, the building was reconstructed; now it houses the residence of the President of Russia. Several urban legends are associated with Sevastyanov’s house. According to one of them, Nikolai Ivanovich Sevastyanov planned to decorate the roof of the rotunda with gold, about which he repeatedly submitted petitions even to the highest name. But since only the domes of the temples are covered with gold, this request was not approved. And as a punishment, the applicant was sentenced to walk every morning to the nearest church in cast-iron galoshes. According to another legend, the owner built a luxurious palace to the envy of the whole city, and he himself lived in a small house opposite and every evening, sitting on a bench in front of the house, admired his creation. Then he went bankrupt and was forced to sell the building to the Ministry of Justice. 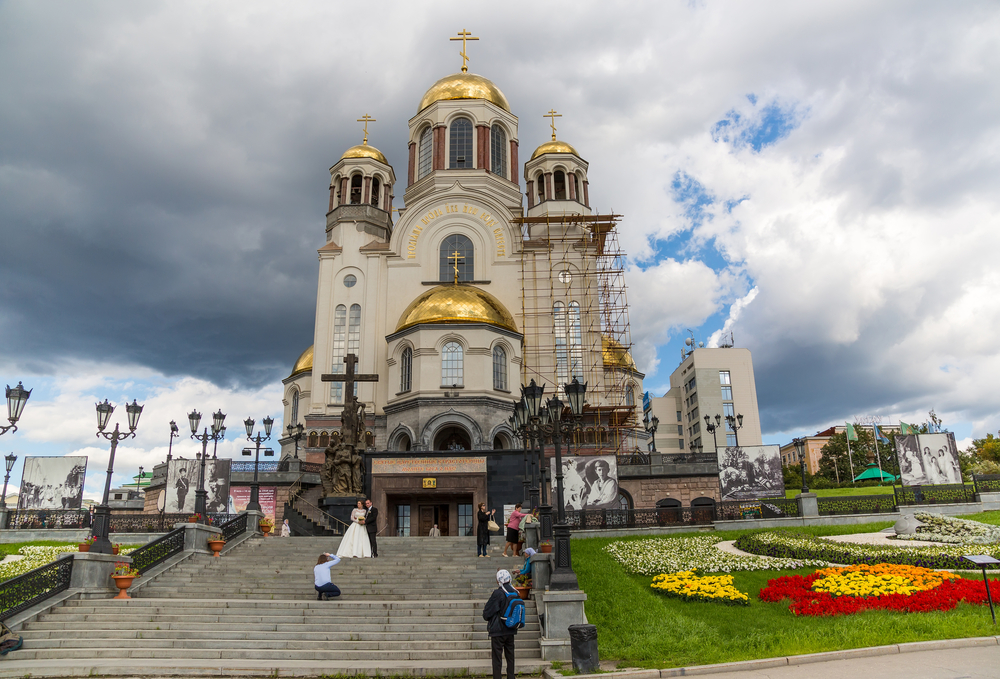 The Church on the Blood is another must-see sightseeing in Yekaterinburg. It was built on the site of the house of the engineer Ipatiev, where the last Russian emperor Nicholas II and his family were kept under arrest and were shot on the night of July 17, 1918. The temple itself appeared at the beginning of the 2000s and today people come here not only to pray, but also simply on excursions: almost every excursion route stops here to visit the temple. By the way, it was in the Temple on the Blood that blogger Ruslan Sokolovsky caught Pokemon. 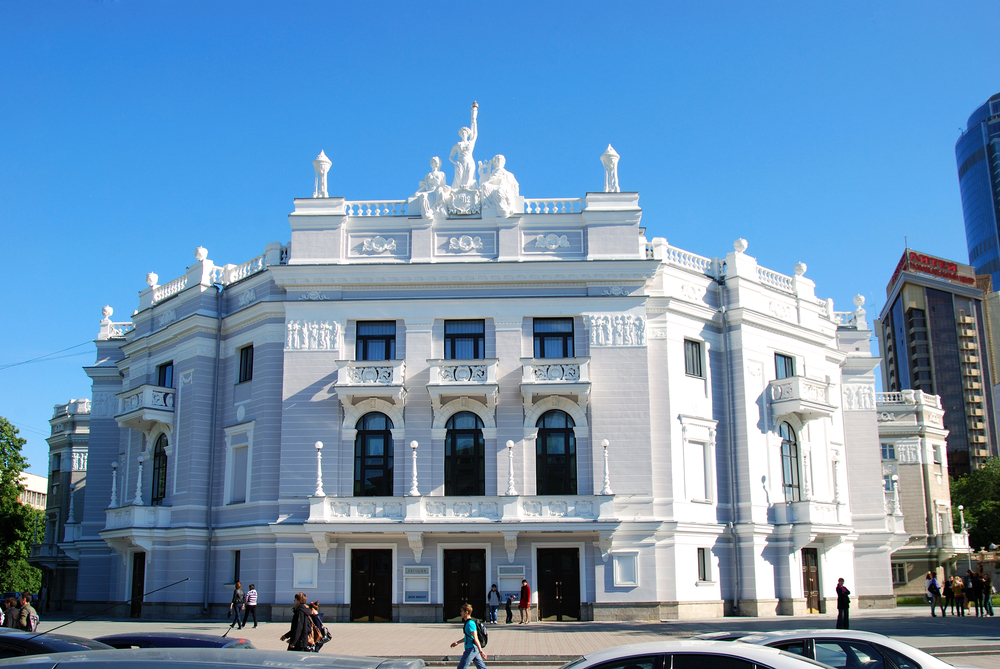 For tourists coming to Yekaterinburg, we would still recommend taking the time and going to the opera house. Perhaps indicative is the fact that city residents try to get out as often as possible to see an opera or ballet. It is considered good form to go to the opera house several times a year. If you are not a big art lover, then just walk to the theater – the building itself is beautiful and serves as one of the symbols of Yekaterinburg.

READ  10 places of Vladimir worth visiting for tourists

Seeing the entire city from a bird’s eye view is a must-see for an exemplary tourist. An open observation deck is located on the 52nd floor of the Vysotsky business center. Going down to the first floor, you can go to the Vladimir Vysotsky Museum. The exposition is based on the poet’s personal belongings, the hotel room in which he lived while on tour in Sverdlovsk was completely restored. The Yekaterinburg Museum has a number of exhibits that are not found anywhere else in the world. In the neighborhood of the Vysotsky business center, near the Antey shopping and entertainment center, there is a monument to Vladimir Vysotsky and Marina Vlady. Despite the fact that it was installed relatively recently, the monument is very popular among local residents and tourists.

Monument to the keyboard 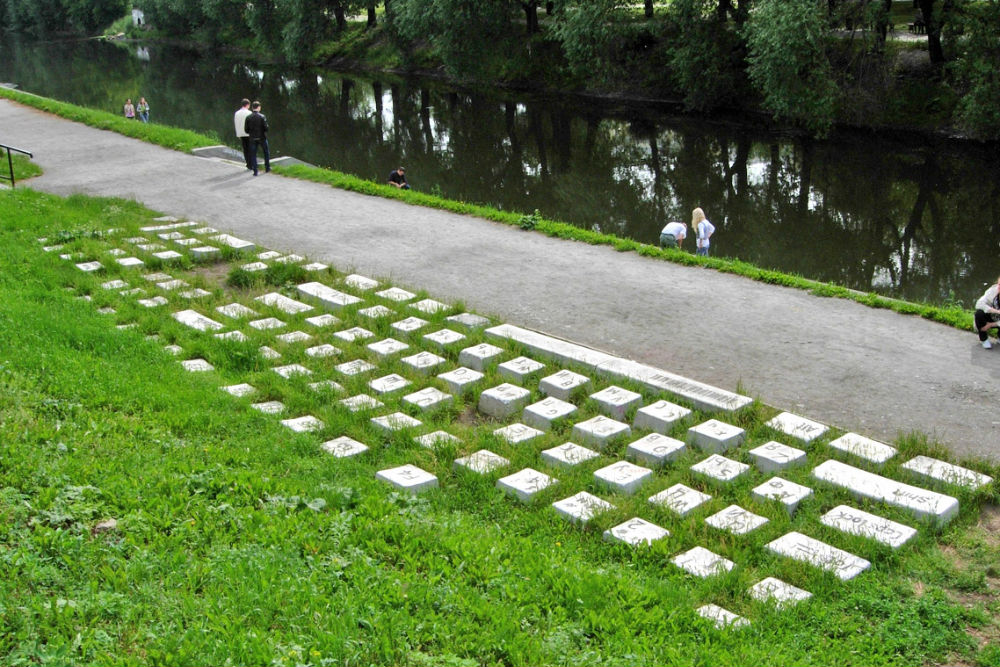 Along the Iset on the embankment there is another monument – a computer keyboard, which was opened in 2005. Despite the fact that each “button” weighs 100 kg or more, the keys have been partially plundered over several years. However, now the monument has been reconstructed. 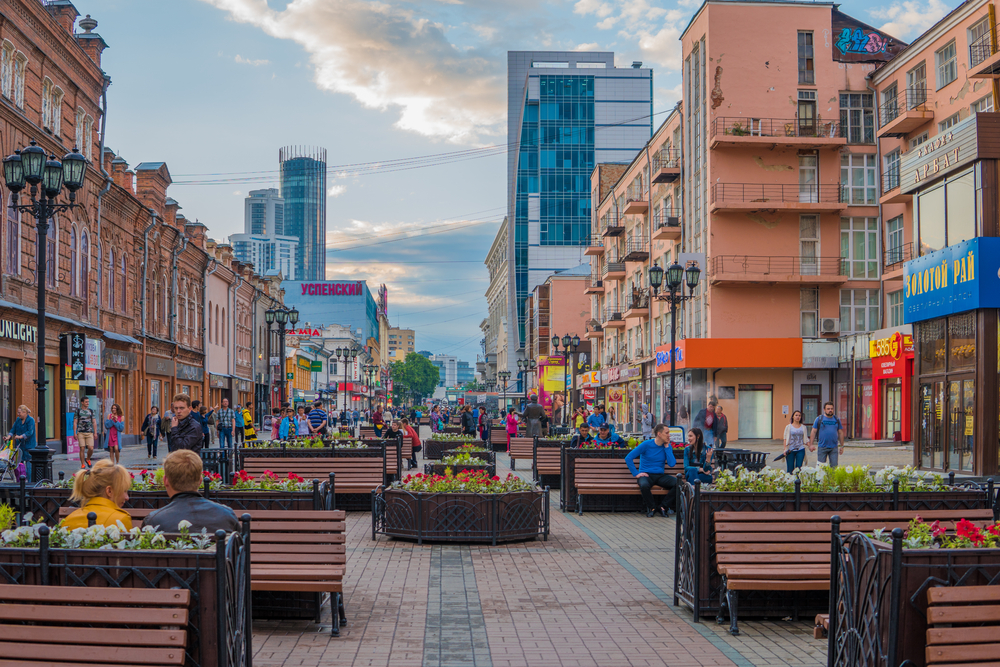 It is also extremely difficult to pass by the local “Arbat”. This is the main pedestrian street in Yekaterinburg and it is worth walking along it: firstly, there are a concentration of shopping centers where you can buy souvenirs (where can a tourist do without them?), And secondly, here you will find the most bizarre sculptures: Friends, Peddlers “,” Lovers “, Michael Jackson and, for example, the character from” Happy Together “Gena Bukin. Among other things, street musicians, actors and clowns often perform on Weiner. 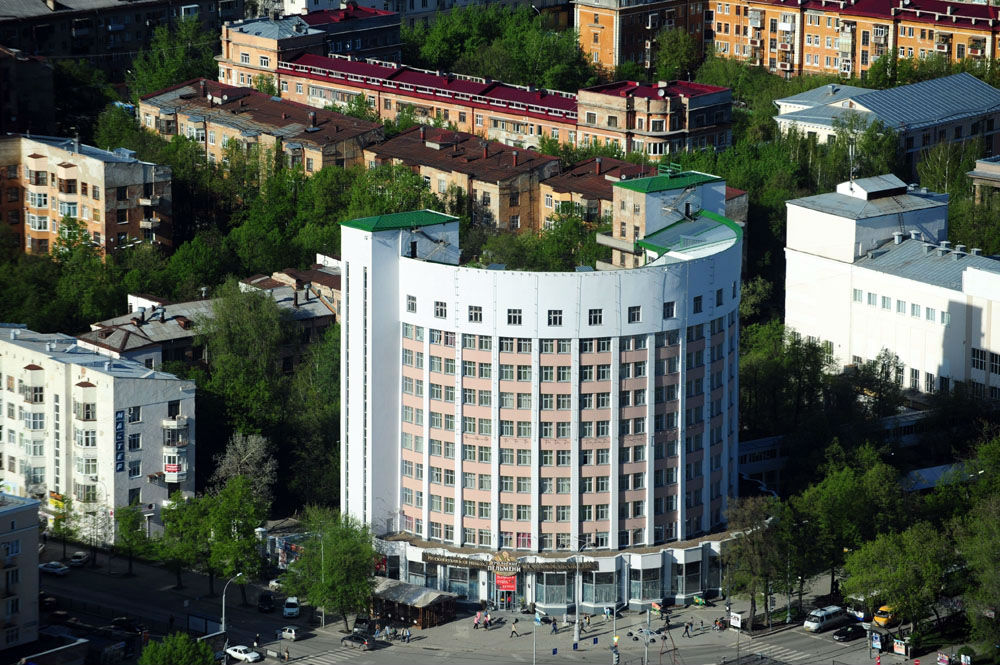 Yekaterinburg is considered the largest center of constructivist architecture. One of the most important monuments of constructivism is the Chekist town – a mysterious place in the city center. The residential block began to grow in the early 30s of the XX century. According to legend, if you look at the Chekist Town from above, you can see the hammer and sickle. Sickle is a semicircular building of the Iset Hotel, Molot is a building of the Museum of Local Lore with an annex. 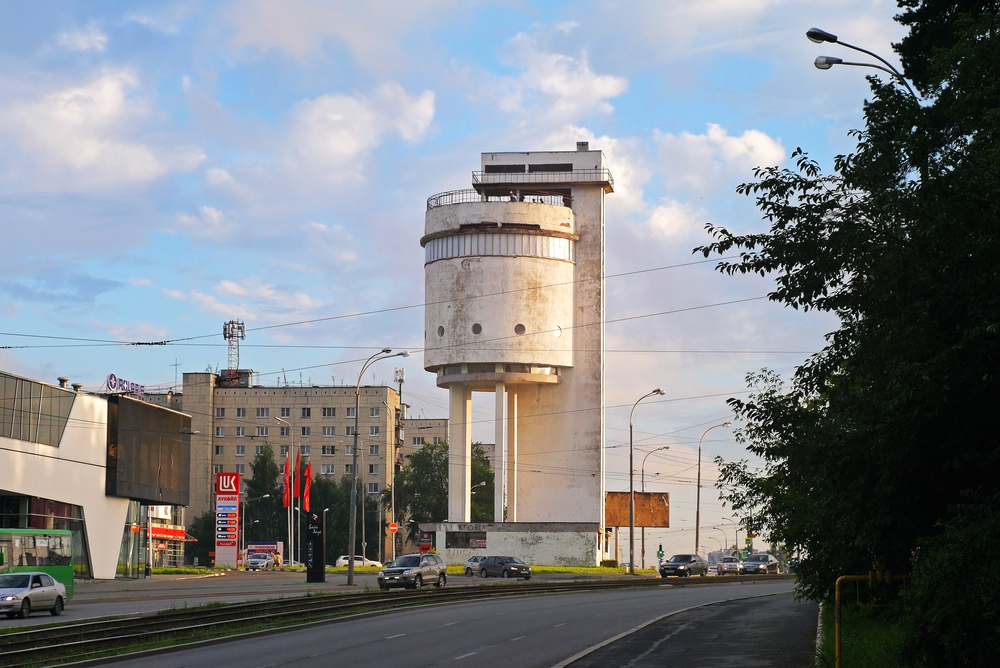 To visit the “White Tower” you will have to leave the city center and go down the metro (by the way, there is also something to see here), get to the Uralmash microdistrict – here is the former water tower of the UZTM plant, built in 1929-31 by the project of Moses Reischer …
The White Tower is recognized as an avant-garde architectural monument. For a long time it was abandoned, now active work is underway to restore it, excursions and cultural events are held.

READ  On the Pacific coast: what to see in Vladivostok in 2 days 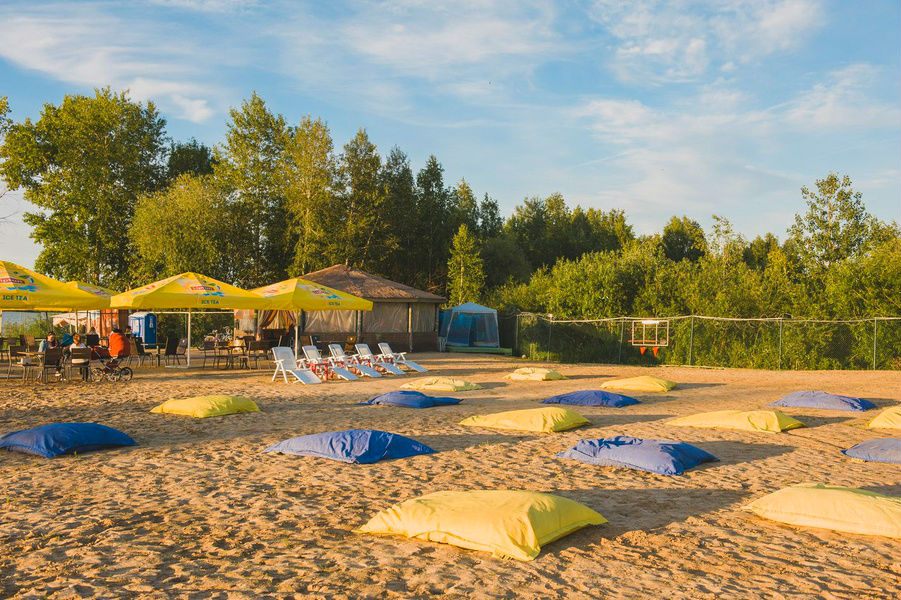 If you decide to sunbathe in Yekaterinburg (which, of course, depends on the weather), then you should pay attention to Lake Shartash. You can relax here in two ways: cheap and cheerful and with comfort. The main thing is that the Emergencies Ministry recognized Shartash as suitable for swimming. An important plus – you don’t have to travel outside the city.

The lake is located within the city. No sun loungers or umbrellas are provided here. Therefore, you have to go with your “accessories”.

The second option is to relax at the SanDali Beach Club. It is located on the southern bank of Shartash. The territory has a volleyball court and a play area for children. There are also showers, a luggage room for storage, and you can rent beach equipment: sun loungers, umbrellas, mattresses, towels. The entrance to the beach complex is free. Sun lounger rental – 200 rubles. 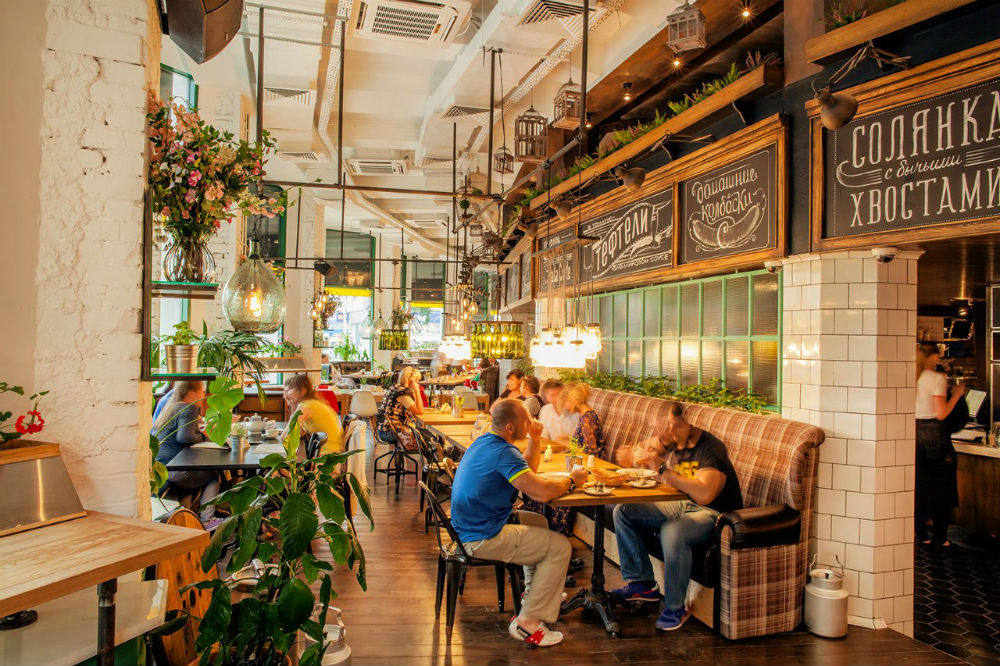 You can have an inexpensive lunch in the very center of the city: in the building of the Iset hotel (by the way, this is also a monument of constructivism) there is an establishment called Factory Kitchen. It opened on the site of the iconic “Ural dumplings”. The average bill for the center of Yekaterinburg is quite democratic here – 200 rubles. 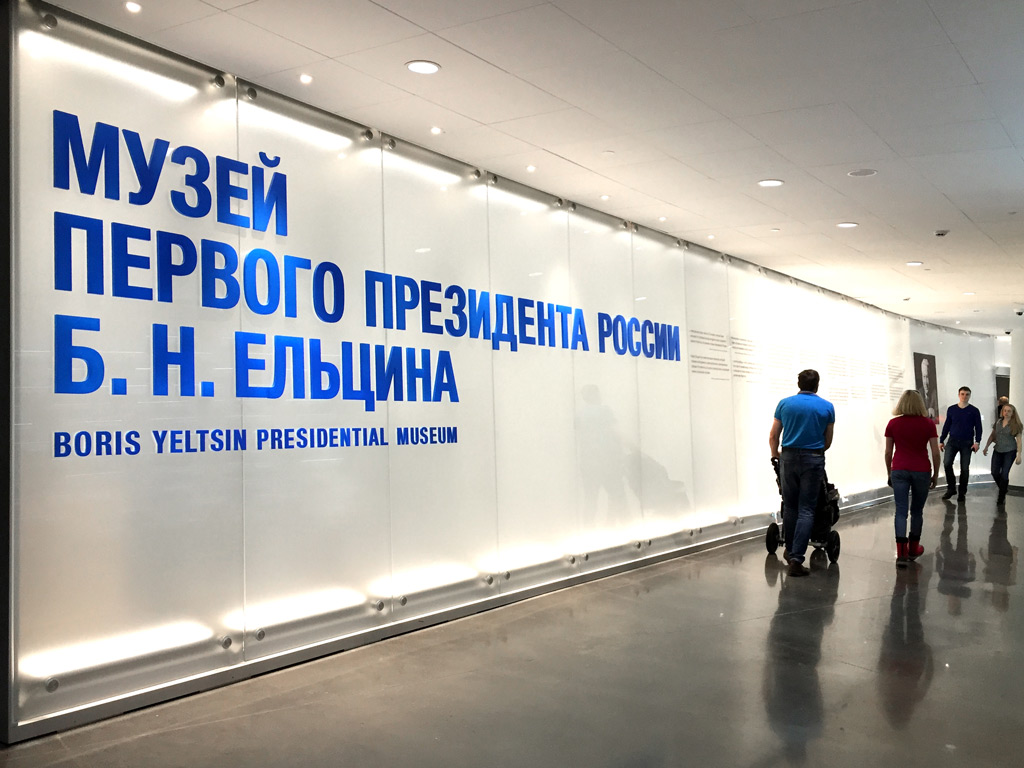 A visit to this place is worth at least in order to see what the director Nikita Mikhalkov criticizes and praises, for example, German Gref. The museum of the first president of Russia has an art gallery, a cinema-conference hall, a bookstore, a cafe, an archive, a library, and a scientific amusement park. Here you can ride in glass elevators overlooking the embankment or sit by the fountains on the second floor. The entrance ticket costs 200 rubles.